Surface water quality in tropical catchments is important for protecting water resources which will be used for potable water supply and recreational activities. Our research covers antibiotic resistance, pathogens & indicators, harmful algal blooms and their metabolites and emerging chemical contaminants.

Algal blooms are generally associated with toxins and off-flavors that can adversely affect water supply, irrigation and recreational activities. They are a recurring issue in many tropical urban systems and with climate change, the associated problems are worsening globally. Here, we seek to deepen the understanding of the cyanobacteria communities which produce algal toxins and off-flavors in local aquatic systems. We go from isolation, culture techniques, to metagenomics and metabolomics to characterize and understand the functioning of cyanobacterial blooms in both field and laboratory settings. The data will subsequently be used to develop water quality models for predicting impacts due to land use changes. We are also studying how cyanophages, the viruses which infect cyanobacteria, play a role in regulating the population dynamics of algal blooms in the tropics. Ultimately, the data will be used to develop models that can help water agencies better manage eutrophication problems.

In the area of microbial contamination, we study the occurrence of pathogens (or disease causing microbes) and their indicators in tropical waters. Singapore’s water resources are scarce and every effort is made to utilize all catchment waterways and water bodies to the maximum, including improving water quality for recreational uses. Emerging microbial contaminants can affect public health and spread of waterborne disease. In this study, we develop rapid and sensitive methods to study the occurrence of viral pathogens and other important microbiological contaminants in the urban water cycle. The study focuses on emerging waterborne viral pathogens from human sources, farmed animals and wild animals. This study also measures uncommon but potentially fatal disease-causing microorganisms, such as Naegleriafowleri. Metagenomics is used to complement molecular methods to study the virome diversity in tropical catchment waters, for which information is very limited. The data can be used to draw insights into emerging viral pathogens of zoonotic origins as well as interactions between phages and pathogenic bacteria/ antibiotic resistant bacteria. A combination of molecular methods and metagenomics will enable us to comprehensively understand the viral community and the emerging microbial contaminants in tropical urban catchments. 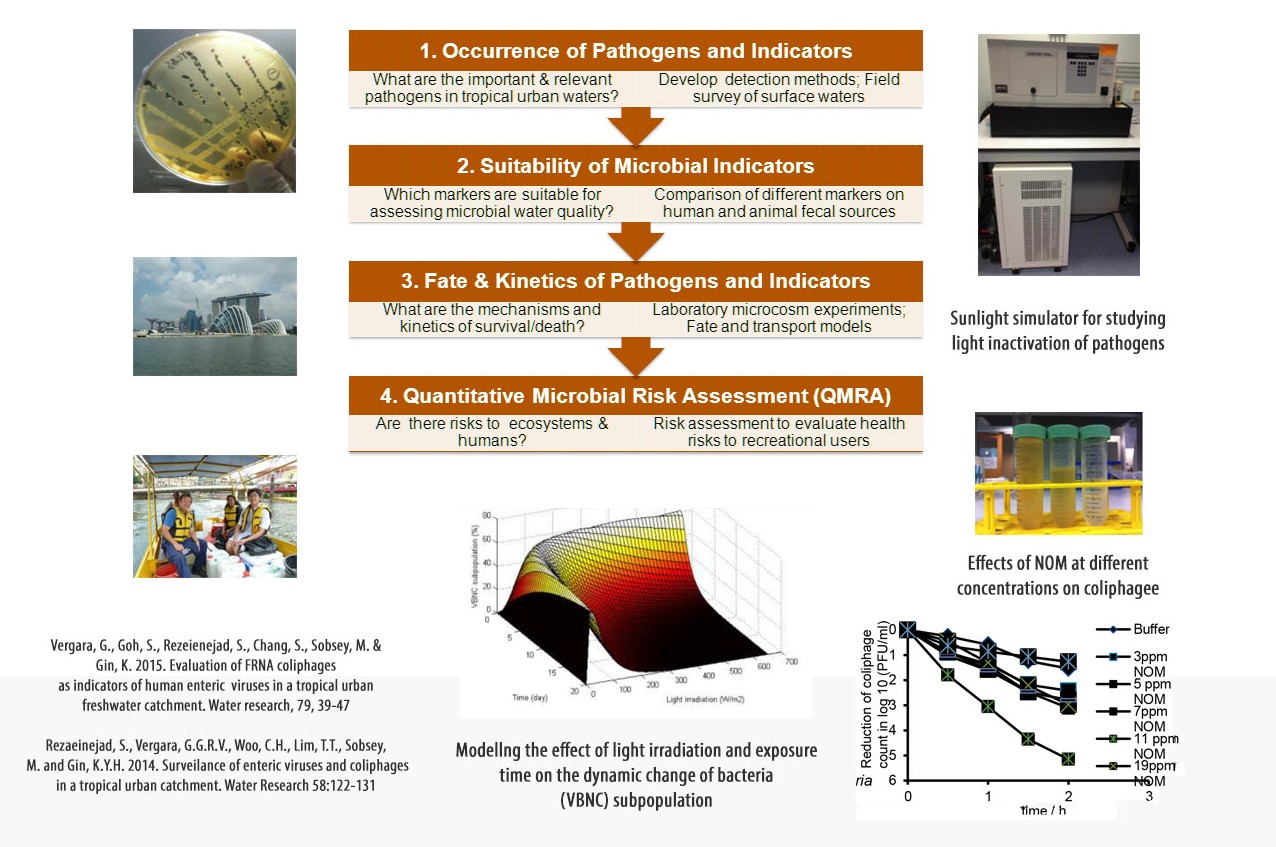 Antibiotic Resistance in the Environment

“Emerging contaminants" can be broadly defined as any synthetic or naturally occurring chemicals that are not commonly monitored in the environment (and have not been regulatated yet) but have the potential to cause known or suspected adverse ecological and(or) human health effects.
Our tasks are to :

Urbanization has led to increasing exposure to a wide range of chemical and microbial contaminants in the environment. For chemical contaminants, we may be using them on a daily basis in personal care products or household items which do not pose an immediate threat. However, over time, exposure to these chemicals could lead to detrimental effects either directly or indirectly through the environment. The term, ‘emerging contaminants’ (ECs) has recently been adopted to describe synthetic or naturally occurring contaminants that are not commonly monitored in the environment but have the potential to enter the environment and cause known or suspected adverse ecological and(or) human health effects. In some cases, release of emerging contaminants to the environment has likely occurred for a long time, but may not have been recognized until new detection methods were developed. In other cases, synthesis of new chemicals or changes in use and disposal of existing contaminants can create new sources of emerging contaminants. The general question we wish to address is what are the impacts of these contaminants on human and ecosystem health and are they significant and how much is out there? The research involves 1) developing sensitive and accurate detection methods for ECs, 2) understanding their transformations, fate and transport through laboratory and field studies, 2) development of computer models to simulate and predict their behavior and 4) analyze their risks to humans and ecosystems. Our work here is carried out in partnership with Shanghai Jiaotong University, under the E2S2-CREATE Program funded by NRF. 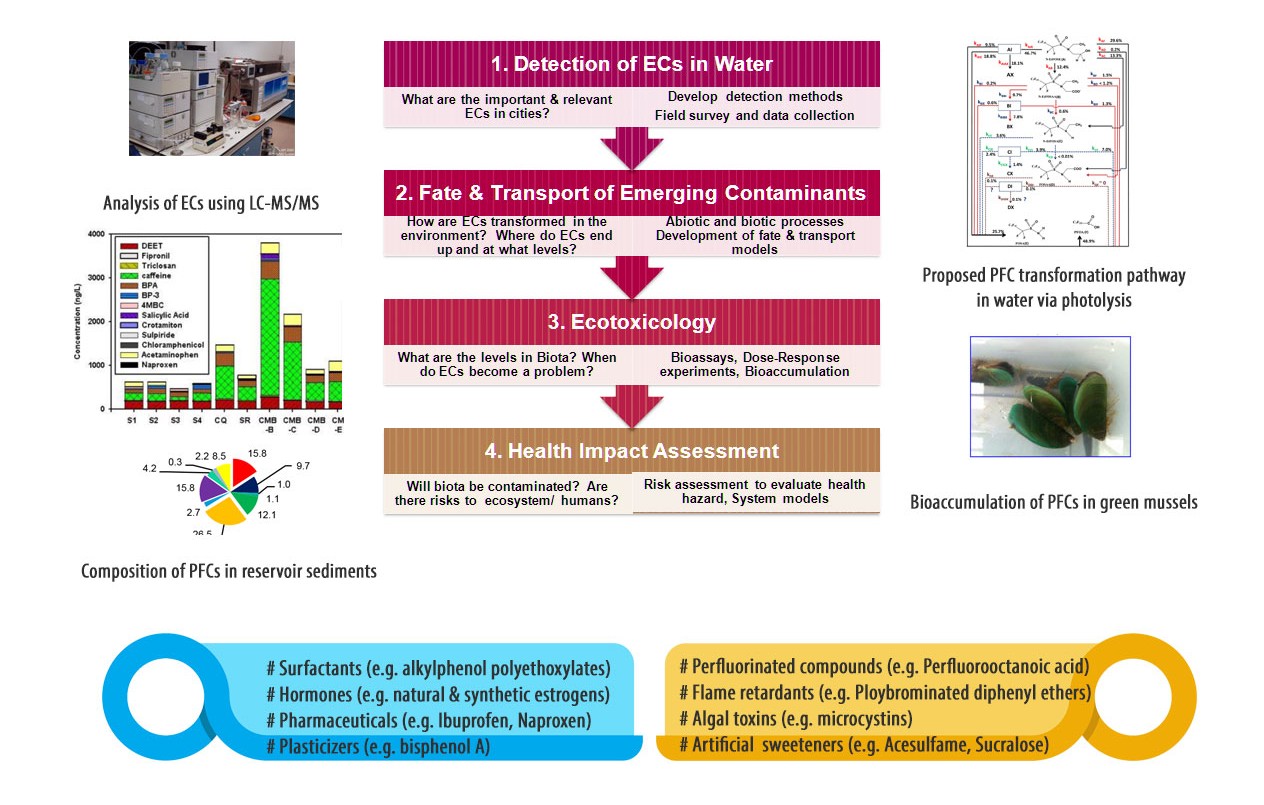